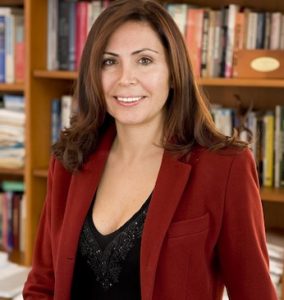 Şuhnaz Yılmaz Özbağcı is Professor of International Relations and serves as the Dean of College of Administrative Sciences and Economics and the Director of Graduate School of Business at Koç University, Istanbul.

Professor Yılmaz Özbağcı received her M.A (1995) and Ph.D. (2000) from Princeton University, specializing on Near Eastern Studies and International Relations. She conducted her post-doctoral Studies at Harvard University. She held visiting faculty positions at the Center for Russian, East European and Eurasian Studies, Stanford University, and at the Center for International Studies, Princeton University. During 2016-17, she was a Visiting Professor at UCLA with a dual appointment at the Department of Public Policy, Luskin School of Public Affairs, and the Luskin Center for Innovation. She received many national and international awards and grants, including Princeton Center for International Studies Fellowship and Sabancı International Research Award. In 2008, she was granted the Distinguished Young Scientist Award (TUBA-GEBIP) of the Turkish Academy of Sciences. Prof. Yılmaz Özbağcı’s success as an educator is also extraordinary. She is the first recepient of the Outstanding Teaching Award at CASE (2012) and she received the “Outstanding Teaching” award given by the President (2016) as well.

Professor Yılmaz Özbağcı’s areas of expertise in the field of International Relations include the international affairs of Eurasia and the Middle East, foreign policy analysis, business and government relations, diplomatic history, energy, and natural resource politics. She has two books and has numerous publications in highly prestigious journals in her field, such as Political Science Quarterly, International Politics, and Energy Research and Social Science. She presented her research at invited lectures at distinguished academic institutions, including Harvard University, Columbia University, Princeton University, Stanford University, Oxford University, Cambridge University, and the Chinese Academy of Social Sciences. Her recent book on Turkish-American Relations entitled Turkish-American Relations (1800-1952): Between the Stars, Stripes and the Crescent (2015) was published by Routledge Press International Relations Series. She served as the principal investigator of the Horizon 2020 project The Future of EU-Türkiye Relations: Mapping Dynamics and Testing Scenarios (FEUTURE) at Koc University (2017-19), which has been the largest research project on EU-Türkiye relations ever funded by the European Commission. Her contribution particularly addressed the policy implications of energy security and sustainable development.